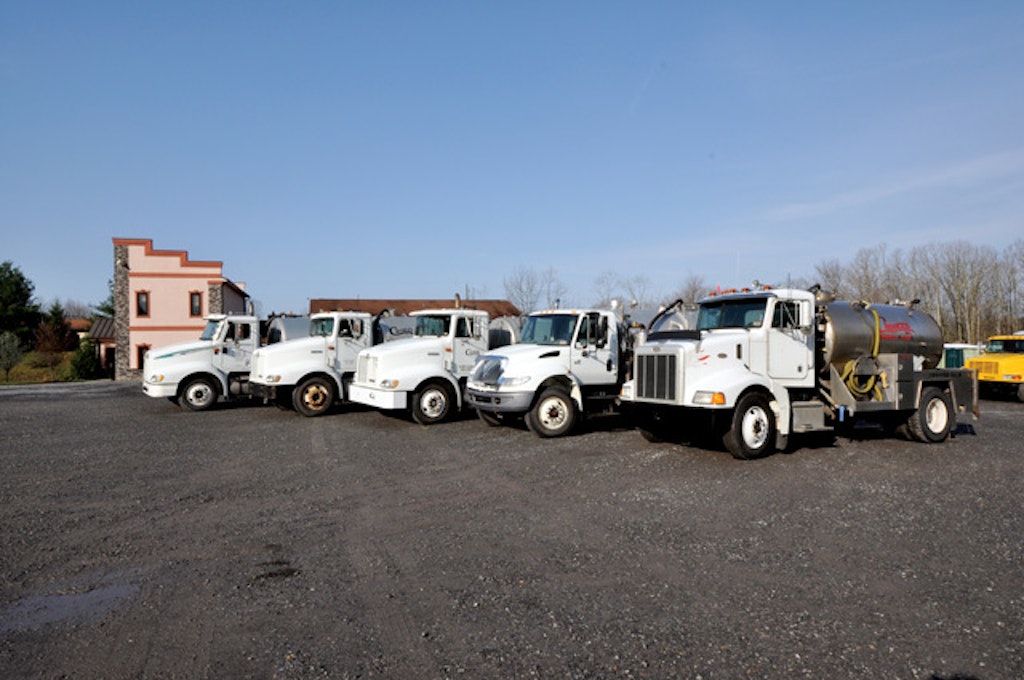 That was in 1995. And by several measures, the diversification efforts were right on target. Thanks to steadier long-term demand for grease-trap cleaning and sewage hauling and the development of a grease-disposal and reclamation process, Crosier took a business focused largely on restroom rentals and generating about $225,000 in gross sales and turned it into a $2 million-a-year enterprise.

Grease-trap cleaning spurred much of that dramatic growth and has supplanted restroom rentals as the primary focus for Crosier’s Sanitary Service Inc. These days, the sales volume breaks down to approximately 50 percent grease traps, about 25 percent septic tanks/sewage hauling and roughly 25 percent restrooms (mostly located at coal mines).

“We collect about 150,000 to 200,000 gallons of grease a month,” Crosier says. “We serve customers in the Shenandoah Valley in Virginia, eastern Kentucky and southeastern Ohio. To build a market, you have to go where the people are.”
By comparison, the company makes just more than 800 restroom service calls a week, down from a peak of 1,500 three years ago, Crosier notes, pointing to a decrease in coal strip-mining and construction restroom rentals.

Over the years, the company’s fleet of trucks and equipment expanded to meet the diversified service offerings. Today, Crosier’s owns 11 service trucks; about 1,500 restrooms, mostly manufactured by Satellite Industries; and roughly 30 hand-wash stations, made by PolyPortables Inc.

A former engineer who graduated from the West Virginia Institute of Technology in 1986 and later earned a master’s degree in business administration from Marshall University, Crosier put his business skills to work after buying the company his father, John, founded in 1964.
Grease-trap cleaning and sewage hauling attracted Crosier for several reasons, including less competition and better profit margins than he enjoys in the portable sanitation and septic service areas.

“Because it’s hard work, fewer people are interested in providing those services, and less competition means higher profit margins,” Crosier says. “And there are high barriers to market entry in grease traps because of disposal issues, and in hauling sewage because the tanker trucks are expensive. And the higher the barriers to entry, the more profit there is to be made.
Subscribe: If you don’t want to bring your iPad into the bathroom, we can send you a magazine subscription for free!

“In the restroom business, anyone with a few dollars can buy a slide-in unit and 20 restrooms and they’re in business,” he continues. “That’s what depresses prices in this business, which is a real shame.”

Grease-trap business is steady because it’s not completely dependent on the economy, explains Crosier, who services restaurants, hospitals, prisons and schools.

“People always eat out,” he says. “In a recession, they may go to McDonald’s instead of Red Lobster, but they still eat out. And schools and prisons still feed people, no matter how the economy does.”

Moreover, state regulations dictate regular grease trap service, but not so with septic tanks. In addition, Crosier says grease traps afford a degree of flexibility for cleaning, as long as it’s reasonably close to the required service interval. That’s not the case with restrooms, which require cleaning at the same time and place every week – a rigorous schedule that can be disrupted by employee absenteeism, truck breakdowns and bad weather.

Initially, Crosier composted grease-trap waste on company-owned land. It was relatively inexpensive because the organic material required to make compost was readily available in the form of sawdust from nearby sawmills. The mills were paying haulers to remove the sawdust, so they were happy to fill Crosier’s semi trailers at no charge.

“Then demand for wood pellets picked up, and suddenly the mills wanted $500 a trailer load for the sawdust,” he says. “That’s when we started looking at other technology.”

At first, Crosier invested in two 40-yard dewatering boxes. But they were labor intensive and difficult to use in winter. So he developed and patented his own system, which heats grease-trap waste in two, 10,000-gallon insulated steel tanks until it’s pasteurized.

“At that point, the grease stratifies, with the (reusable) brown grease on top and water and food products on the bottom,” he says. “Then we pump off the brown grease and sell it for about $1 a gallon to brokers, who bid on it. Companies use it to make an animal-feed additive or for fuel.”

The system can process a maximum of 20,000 gallons of grease-trap waste daily, enabling Crosier to save money on transportation and disposal costs. It also reduces the company’s fuel costs because the boiler that heats the tanks runs on brown grease. The company uses about 10 percent of the brown grease it produces, and sells the rest.

“It’s a very economical system, so the (profit) margins are good,” he says. “In our business, we have to compete on price with restaurants, not service. And being able to dispose of waste economically is what lets me compete on price.”

Because it’s pasteurized, the remaining food and water waste can be land applied on farmland for free, he adds.

For cleaning things such as car-wash pits, sewer lines and stormwater drains, the company uses a 1999 International 8100 with a 2,500-gallon waste/500-gallon freshwater steel tank, made by Satellite Industries. The company also owns a Terramite T9 tractor loader backhoe, manufactured by Terraquip, and a John Deere 450 excavator.

For restroom service trucks, Crosier prefers to buy used large, heavy-duty, single-axle road tractor truck chassis with rust-free aluminum-and-fiberglass cabs, then buy and install new tanks and pumps. “We buy them with 200,000 or so miles on them because the engine and cab will last until about 800,000 miles,” Crosier says. “The trucks also have 35,000-pound gross vehicle weights, as opposed to 26,000 pounds for a typical restroom truck.

“That’s important because to service restrooms, we drive in very mountainous terrain, and coal mines are located amid very rugged terrain,” he explains. “We’ll put 40,000 to 50,000 miles a year on the engine. The transmissions in these trucks are huge and hold up to abuse.”
How tough are driving conditions? Crosier says his drivers deal with seven- or eight-mile-long stretches of 7 percent grades on some interstates, and haul roads in coal mines with up to 15 percent grades. And they often drive alongside mining haul trucks with tires that are taller than Crosier’s trucks. The conditions require additional insurance, and mines require Crosier’s drivers to attend an annual eight-hour course that certifies they’re trained for driving on mine property.

“You might drive through 6-inch-deep mud for hours,” he notes. “These mines are big … and it’s like driving on the surface of the moon. If you have 50 restrooms to service, for instance, you could be in the mine for six hours easily. It’s incredible.”

Crosier is a big believer in joining professional organizations, such as the National Association of Wastewater Transporters and the Portable Sanitation Association International. The groups are a great source of information about regulations, products, and business operations – not to mention camaraderie.

“It’s good to spend time with people who endure what you endure in business,” Crosier says. “It provides you with encouragement and motivation to continue. It allows you to see that you can do this successfully and make money.’’

Even though he’s been involved in the industry for many years, Crosier says he still learns a lot of good business lessons from his peers. As an example, Crosier cites what he’s learned about damage waivers for portable sanitation customers. He says that a modest $5 waiver fee per month on 300 restrooms would net $18,000 per year.

“Before I attended PSAI meetings, maybe 10 percent of my customers bought the waiver,” he says. “Then I attended a PSAI meeting where damage waivers was a roundtable topic. I learned the right way to sell a damage waiver and have had more than 90 percent takers ever since.”

Overall, Crosier has no regrets about leaving the corporate world 16 years ago, trading the perks that come with working as a structural engineer for the world of portable restrooms, grease traps and septic tanks.

“I had a nice office with a wonderful view and a great staff,” he says. “When I told my co-workers what I intended to do, they thought I was nuts. They couldn’t understand why someone would leave that sort of work and a comfortable office for this kind of work.

“But they don’t realize that when someone in this business needs you, they really need you,” he continues. “And when you fix their problems, they’re genuinely grateful that you’re there, doing what you do. I didn’t get that kind of gratification working in an office.”

This article originally appeared in the February 2012 issue of Pumper Magazine.

With over fifty years in the industry, you can expect professional and reliable service from Crosier’s. Our staff is committed to providing you with the very best quality experience at every level with the most modern equipment available in the industry and the best cleaners and deodorizers on the market to ensure cleanliness.