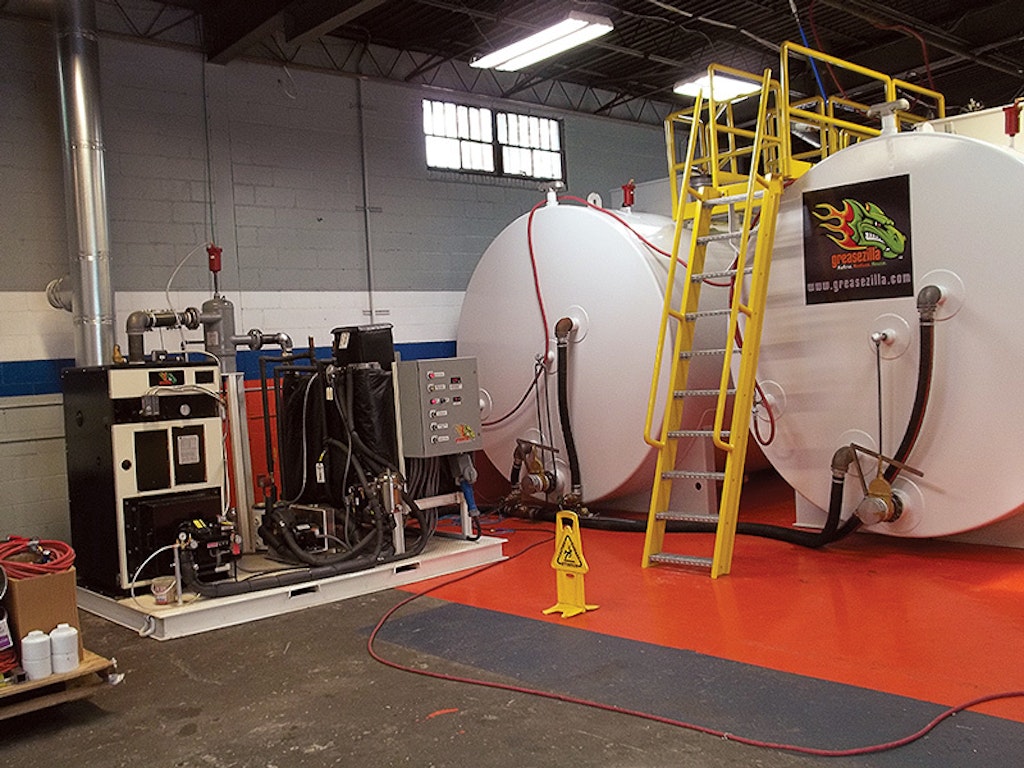 The Greasezilla grease-separating unit, made by Downey Ridge Environmental Co., enables grease-trap pumpers to reduce and better control waste disposal and fuel expenses, create a new revenue stream and run a more eco-friendly operation. And it produces its own fuel: brown grease, a byproduct of the separation process.

The system requires about 1,000 square feet of indoor space. It’s designed for pumpers who clean a considerable number of grease traps, but it’s also suitable for use by municipal treatment plants, says Ron Crosier, president of Downey Ridge and the owner of Crosier’s Inc., a portable restroom and grease-and-septage pumping operation in Lansing, W.V.“You need to collect at least 100,000 gallons of grease per month for Greasezilla to be cost effective,” he says. “The more you spend on grease disposal, the more sense it makes.”

Here’s how the system works: Pumpers first let gravity separate the water and the grease, then drain the water into a municipal sewer drain. Then they either pump or gravity-feed the remaining grease and sludge into a 10,000-gallon Greasezilla tank. Grease traps typically have a water-to-sludge ratio of 3:1 or 4:1 and brown-grease content of 3 to 5 percent.

Then a boiler heats the tank contents to a temperature of about 160 degrees. After about 24 hours, the contents separate into four distinct layers: rich brown grease, an increasingly valuable commodity in some regions (used for biofuel or animal-feed stock); debris; water; and food particles. The brown grease can be pumped out and sold, typically for $1.50 to $2 per gallon; the remaining content, which is pasteurized and nearly oil free, can be land-applied or discharged into a sewage treatment facility, Crosier says.

Moreover, the Greasezilla unit runs on brown grease; about 5 percent of the brown grease produced in each batch is pumped back into the system and used as fuel.

A typical Greasezilla setup includes dual 10,000-gallon, double-wall, insulated steel tanks. Two tanks increase efficiency because trucks can dump grease in one while the other is processing a load. A full tank weighs about 95,000 pounds, so any commercial building with a concrete slab should be able to handle the weight. The unit requires no special electrical upgrades, he says.

Greasezilla eases the financial sting of increasing disposal fees, labor costs and transportation expenses associated with trips to waste treatment and water treatment plants. In addition, it helps pumpers generate another revenue stream by selling brown grease and/or processing grease for other pumpers, Crosier says. The unit also appeals to customers who prefer to use vendors they perceive as environmentally sensitive, Crosier says.